In addition to its steak, LongHorn is well known for its delicious rolls that come out before each meal, as well as its burgers, salads, sides, and of course its margaritas.

LongHorn Steakhouse is an American casual dining steakhouse restaurant chain with locations throughout the United States and other parts of the world. The steakhouse has expanded throughout the years and has earned a reputation of providing its guests with great steak. The establishment strives to be the best steakhouse through both its food and its service. Providing bold, delicious flavors, Longhorn aims to please. The steaks are hand cut, hand seasoned and grilled to its customers specifications. The service is excellent and guests are provided with a great steakhouse dining experience.

The chain prides itself with providing expertly grilled steaks and juicy burgers. The steaks, seafood, and chicken are served fresh and never frozen. The chain also provides a full service bar, which serves beer, wine, liquor and cocktails. The chain displays a Texas-style Western theme and a warm friendly ambiance, where guests and relax and enjoy their meal. The establishment indeed captures the flavor and fun in its restaurants. The establishment serves high quality food along with offering warm Western hospitality.

In Atlanta, Georgia, LongHorn Steakhouse opened its doors in 1981. The restaurants original name was LongHorn Steaks Saloon, and it was located at Peachtree Street, Atlanta. George McKerrow Jr. was the founder of the restaurant. He had a passion for great steak and decided to open it. The restaurant was initially not successful and didnt have many customers. In 1982, however, there was a snowstorm in Atlanta that left many motorists stranded. The restaurant became a popular choice for motorists who were left without shelter or food. Soon word spread quickly about the deliciously grilled steaks, and the business took off.

LongHorn boasts over 400 locations. There are many locations of the chain in different states, such as Georgia and Florida. Watertown, New York, and Garner, North Carolina are two of the recently opened locations. Bismarck, North Dakota, will soon be home to another restaurant. It also has locations at Detroit Metropolitan Wayne County Airport, Detroit, Michigan, and Hartsfield Jackson Atlanta Airport, Atlanta, Georgia. Locations around the world include Qatar, Saudi Arabia, and El Salvador.

LongHorn Steakhouse is one of the most well-known chains of restaurants within the United States, with nearly 500 locations in the US.

The restaurant was established around 1981 by the best-friend duo from Atlanta Georgia. LongHorn Steakhouse is now owned by Darden Restaurant, a restaurant holdings company, which also is the owner of Olive Garden and Cheddars.

In addition to the beef, LongHorn is well known for its delicious bread rolls that are served before every dinner, along with its salads, burgers and dishes, and obviously, margaritas.

In addition to the meat, LongHorn is well known for its delicious bread rolls which are served prior to each meal, and its salads, burgers, dishes, and of course, its margaritas.

You May Like: What Cut Of Steak Is The Best

Going to dine at Longhorn Steakhouse? Check out the full menu for Longhorn Steakhouse. When available, we provide pictures, dish ratings, and descriptions of each menu item and its price. Use this menu information as a guideline, but please be aware that over time, prices and menu items may change without being reported to our site.

Like what you see? Find the location nearest you: Longhorn Steakhouse locations

What You Should Absolutely Never Order From LongHorn Steakhouse

Countless varieties of steak are available for lunch, which is great for any meat-lovers popping into to take advantage of the Longhorn lunch menu. Aside from that however, there is plenty to choose from.

A great aspect about the Longhorn lunch menu is the Longhorn Lunch Combinations. Combos priced at $7, $8, or $9 area available, and allow you to combine salad, mixed greens or a bowl of soup with a favourite from the menu.

Mains include shrimp chowder, the Steakhouse burger, and a prime rib half sandwich to name a few. And you can choose the best deal depending on how hungry you are feeling â a win-win! It is just another example of why you should be checking out the Longhorn lunch menu the chance you get!

Read Also: Where To Buy Meat For Steak Tartare

Just the sound of this sandwich should send shivers up your spine. It delivers a whopping artery-clogging 50 grams of fat, more than the suggested daily limit, and nearly the same amount of sodium in more than three hot dogs. It’s doubtful whether anyone needs a sandwich with this many calories, but if you must have it, eat some and save the rest for another meal or two.

Longhorn Menu Prices : Visit For A Fresh And Quality Steak 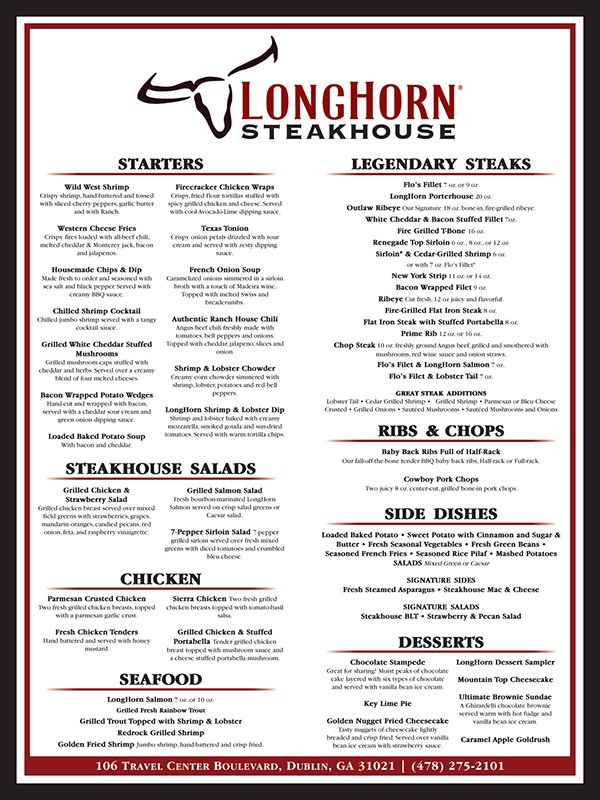 The history of Longhorn restaurant is amazing and very interesting. Let me tell you why. The LongHorn Steakhouse was started in the year 1981 in the small town of Georgia, Atlanta. What started as a passion for cooking the perfect steaks for his guest, soon became a profession for George McKerrow Junior. In the initial stages, the restaurant was named Longhorn Steak restaurant and saloon.

The restaurant was unable to do good business because of a lack of marketing, but this did not discourage the owner as he continued to go with it. But times changed, when a dreadful snowfall hit the town of Atlanta, and several motorcyclists were marooned in the town. It brought the attention of the motorcyclist to the restaurant, and soon the flavors of LongHorn Steakhouse steaks spread like Wildfire, and there was no looking back.

Very soon, the owner of LongHorn Steakhouse spread his reach to all the corners of the United States along with Puerto Rico. All of this happened in the year of 1990. Currently, the restaurant has stores in almost 400 locations and is owned by the Darden Restaurants, which bought the rights of the restaurant from its original owner in the year of 2007.

Worst: Renegade Sirloin 6 Oz With Half

You probably don’t think much about BBQ sauce when it’s running down your chin, other than that it’s delicious, but it’s also loaded with added sweeteners. These ribs are swimming in the same amount of sugar as found in three Dunkin’ cinnamon donuts. And sugar isn’t the only strike against this dish, of course. The fat and sodium levels are a nutritional nightmare. Talk about a triple threat!

Longhorn Steakhouse outlets are open every day of the week. The restaurant opens for lunch at 11:00 a.m. and dinner is always served at 4:00 p.m. onwards. The closing hours from Sunday to Thursday are at 10:00 p.m. but Fridays, the restaurant extends up to 11:00 p.m. Nonetheless, the closing hours vary from one location to another and you need to keep tabs with the outlet near you to know the exact closing time. The restaurant is usually closed during Christmas and Thanksgiving so that staff can spend some time with their family.

How To Grill Ribeye Steak On Charcoal Grill