If Nashvilles traditional steakhouse is your serious, staid uncle, then Bourbon Steak is the oppositeyoung, dashing, and always up for a party.

Set on the 34th floor of the gleaming new JW Marriott Nashville hotel, this handsome space delivers a drop-dead incredible view, as well as a dining experience unlike anything Music City has seen before.

It comes from Michael Mina, a powerhouse chef and restaurateur who has opened more than 40 restaurants around the world.

Ive always said, I want to build a four-star restaurant for food and servicebut I want it to be a party, he says. Yes, theres steak on the menu. But its just a really great dining experience, period.

Based in San Francisco, Mina was introduced to Nashville by singer-songwriter Michelle Branchthe two once cohosted an online cooking show together.

When the development and hospitality group Turnberry floated the idea of a Nashville restaurant to Mina, he says, Theyd hardly gotten the words out and I said, Im in.

In the works for nearly two years, the restaurant opened in September.

The most striking feature is that view. Mina insisted on opening up part of the space to the elements, allowing for an indoor-outdoor terracein warm weather youre standing, breathless, at the worlds edge. On cold days, the windows are shuttered, but the view is no less spectacular, especially around sunset.

Sampling The New Menu At The Sky

Michelin-starred celebrity chef Michael Minas Bourbon Steak Nashville, the steakhouse on the 34th floor of the JW Marriott Nashville, opened its doors less than a year ago to rave reviews. Guests keep coming back for a timeless dining experience while taking in unparalleled skyline views of the city. Always on the hunt for the highest quality fresh, seasonal ingredients, executive chef Michael Lishchynsky recently added some delicious items to the already innovative menu that includes Minas signature items like Maine lobster potpie and black truffle mac and cheese.

About Our Chef: Michael Mina

Born in Cairo, Egypt, and raised in Ellensburg, Washington, Chef Michael Mina has enjoyed a love affair with the kitchen, creating memorable dining experiences for guests from a very early age.

Chef Minas epicurean journey began in 1987 at the Culinary Institute of America in Hyde Park. During those 18 months of formal schooling, he spent his weekends sharpening his natural talents with hands-on experience in Charlie Palmers kitchen at the upscale Aureole in New York City.

At the start of his career, Chef Mina was presented with the opportunity of a lifetime with then-executive chef of the Bel Air Hotel in Los Angeles, Chef George Morrone. The two were asked to develop a concept and create a menu for an upscale seafood restaurant in San Francisco the city Chef Mina had dreamed of calling home one day.

Welcomed to San Francisco by a major earthquake his second day in the city, he was unfazed and went to work immediately under Chef Georges direction. Chef Mina dedicated himself to creating a complete dining experience training the entire kitchen staff personally and refining the menu as chef de cuisine. AQUA opened to rave reviews and national acclaim in 1991. Chef Mina served as AQUAs executive chef from 1993 to 2002, where he was awarded Rising Star Chef of the Year in 1997 and Best California Chef in 2002 by the James Beard Foundation.

This Is The Highest Rated Restaurant In Nashville

There is no shortage of amazing restaurants in Nashville. From Southern-inspired dishes to steakhouses and pubs, you can find almost any food you could want in Music City.

With so many choices, it could be difficult to narrow down where to eat. To help in your search, TripAdvisor has lists to help find the best option for whatever you desire, from dietary restrictions to neighborhood-specific spots. The review-based travel site even lists the highest-rated restaurants around the city.

So which restaurant has the highest rating in Nashville?

This Music City steakhouse is located in JW Marriott Nashville and offers “a rare experience, well done” where guests can enjoy high-quality dishes served alongside a 360-degree view of the Nashville skyline. JetSetter even name Bourbon Steak by Michael Mina one of the best new Nashville restaurants to try in 2019.

With nearly 400 reviews, Bourbon Steak by Michael Mina has a 4.5 out of 5 rating with high marks in all categories, including food, service and value.

Here are the Top 10 highest-rated restaurants in Nashville, according to TripAdvisor:

A Look Inside: Bourbon Steak 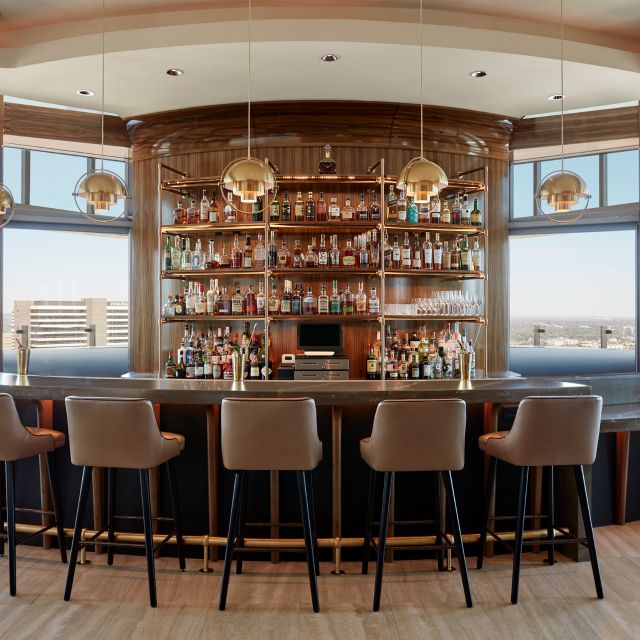 Bourbon Steak Nashville, the first Nashville project by Michelin-starred and celebrity chef Michael Mina, is located on the 34th floor of the JW Marriott Nashville. The American steakhouse is one of the highest restaurants in Nashville, offering 360-degree views of downtown in an elegant setting. Nashville Guru stopped by to get a look inside.

Creekstone Farms raise premium Angus beef that they claimed that has not been genetically modified in any way. And their feeds are all organic, no antibiotics, no growth hormones, etc etc. I dont really trust these claims anymore because of the loose standards that FDA holds.

14 oz. Prime New York strip, red wine-shallot butter was slight firmer, leaner cut than the filet mignon. I liked the bits of fats that really enhanced the flavours of the meat.

I chose the 14oz NY strip, medium rare. It was a bit leaning towards medium, which was surprising for me for a restaurant of such reputation to screw up on the doneness. But the sides made up all the shortfall with its flavours.

A contemporary twist on the traditional steakhouse, the restaurants bourbon-inspired palette is accented with bright shades of blue and chic bronze details. Wood panels throughout, decorative metal screens and large-scale chandeliers add to the warm, clubby atmosphere. In the back, Bourbon Sky boasts a circular bar to serve guests both inside the lounge and on the terrace that extends beyond the hotels edge. When weather is nice, the terrace windows open to create a truly unique setting.

A 22-ounce 100-day dry-aged cowboy rib-eye joins the impressive roster of prime Angus beef as well as a 28-ounce 50-day dry-aged porterhouse. The sweet corn soup with Alaskan king crab and Bentons ham or street corn with jalapeño, cotija and yuzu koshu is the perfect accompaniment to any meal. In early September, beet salad with lavender goat cheese mousse and raspberry and beet vinaigrette, and scallops with citronette dressing, shaved fennel, fennel fronds and Hearts on Fire microgreens will be available.

You May Like: Jose Ole Steak And Cheese Chimichanga

Arrive early and relax in Bourbon Sky with a cocktail from the specialty menu. Drinks can be ordered either from the traditional or rebellious column, and three new ones are on the list: whiskey sour, Negroni and Penicillin. Either version of the Penicillin is balanced, well rounded and refreshing for these dog days of summer. The traditional version is scotch-based, and the modern interpretation with gin, Earl Grey, honey and ginger is the perfect segue into fall.If those arent tempting, the astounding wine list has more than 500 selections.

Where To Buy Raw Tomahawk Steak