“Ready to experience Nacho Fries bursting with heat?” Taco Bell asked fans in its July 26 announcement of a whole bunch of new items that are due to arrive in test markets around the country. Really, Taco Bell? Bursting with heat at time when your hot sauce has been known to be missing in action ? Well, apparently the fast food chain is going to out-hot itself with the introduction of the “White Hot Ranch Fries,” featuring a sauce made from ghost peppers. Ghost peppers, as you might know by now, are some of the hottest peppers fit for human consumption .

As described by Taco Bell, this super-spicy new item starts with Nacho Fries topped with seasoned beef or marinated steak, nacho cheese sauce, tomatoes, cheddar cheese, low-fat sour cream, and, of course its new “White Hot Ranch Sauce,” which is made from ghost peppers and buttermilk. “The White Hot Ranch Fries can be ordered topped or in a burrito for $2.99, and the Steak Hot Ranch Fries will be available for $3.49,” the nationwide taco chain announced.

The only catch is that during testing, or at least during this phase of testing, the White Hot Ranch Fries will be available only in Chicago-area Taco Bell locations. Stay tuned, however, because if these are as hot as they promise to be in popularity too, perhaps it’s only a matter of time before they land at a Taco Bell near you.

How Do The The Steak White Hot Ranch Nacho Fries Taste

We’re not going to lie: These fries were excellent and supremely craveable. The one knock on the batch we tested was that the fries themselves didn’t seem fresh and were a little bit soft, but with so much moisture happening from the sauces that didn’t really matter at all. Everything smooshed together into a soggy, delicious mess.

We were kind of afraid of the steak, as industrially-processed steak is often bad and sad, but the steak slices in the Steak White Hot Ranch Nacho Fries were tasty, tender, and very well-seasoned. Every component in the dish was well-seasoned, in fact. Taco Bell is not shy about adding salt and other spices to its food, which is one of its great strengths as a fast food operation.

The White Hot Ranch contributed a little bit of buttermilk tang and a decent amount of spice to the proceedings. We usually douse everything we eat from Taco Bell in the spicy Diablo Sauce, but that wasn’t necessary with these fries. The tomatoes seemed like an afterthought, but they did have a hint of freshness and acidity that complemented all the rich, creamy components. We would order the Steak White Hot Ranch Nacho Fries again in a heartbeat.

Taco Bell Nacho Fries are deliciously seasoned with Mexican spices and served with creamy cheese sauce. You can make them at home with this easy copycat recipe, which is perfect because sometimes this fan-favorite isnt on the menu.

Were you ever forced to choose between ordering french fries or nachos? No one should have to make such a heart-wrenching decision. But dont worry, Taco Bell has your back with their one-of-a-kind Nacho Fries. But if you cant run to the border, you can still make this Taco Bell Nachos Fries recipe at home, so you wont ever have to compromise again. All kidding aside, these nacho fries taste amazing and are perfect for enjoying as a snack or for spicing up dinner. Go ahead and give this recipe a try, but prepare to share. 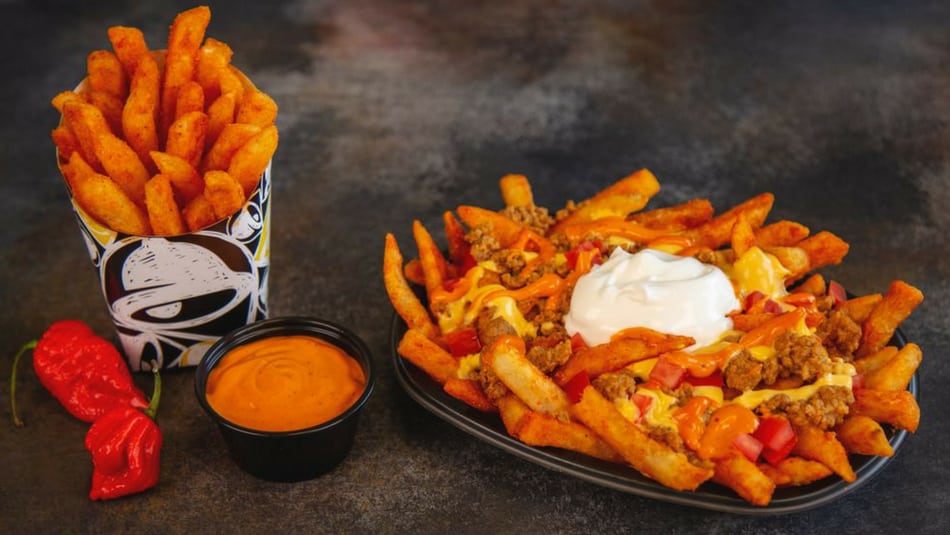 This spicy nacho sauce beats any cheese sauce in a can, hands down. Dont try to save a few minutes by using ready-made nacho sauce when making it fresh is simple and so much better! While the recipe calls for using slices of American cheese, buying a block of processed mild-tasting cheese costs less and works just as well if you cut it into small pieces before melting. Whether you choose to go the authentic Taco Bell nacho cheese sauce route and use orange cheese is up to you.

Taco Bell has never been strictly bound by the constraints of classic Mexican food. The chain has experimented with its menu, leading to items like its Mexican pizza and a taco that uses fried chicken as a shell.

This is a company that also has created passionate fan reactions by removing items from its menu. The Yum Brands – Get Yum! Brands, Inc. Report chain might not be quite as outrageous as its sister brand KFC, which has released everything from lip gloss to a pillow, but Taco Bell has been willing to experiment with its menu and create new fan favorites even if they’re not quite traditional Mexican classics.

Taco Bell also loves something that gets attention. That’s why it brought back the Choco Taco and why it has offered a variety of drinks featuring various flavors of Mountain Dew. – Get PepsiCo, Inc. Report

This is a chain that’s willing to do the outrageous and push the boundaries of what should be on its menu. The biggest example of that might be its nacho fries, a decidedly Taco Bell take on a fast-food staple.

* Please keep in mind that most fast food restaurants cannot guarantee that any product is free of allergens as they use shared equipment for prepping foods.

How To Buy A House In A Sellers’ Market

That’s a give-them-what-they-want take on an idea a Taco Bell fan had during a late-night visit after one too many adult beverages. It’s a mashup of favorites that seems both excessive and extremely necessary.

Eating a Steak Nacho Fries Burrito will pile 520 calories on to you and set you back $3.49 . Both nacho fries and the steak nacho fries burrito will be available for a limited time.

Taco Bell Has Something New

Taco Bell might be the fast-food chain most willing to experiment with its menu. It seems to offer endless takes on the same ingredients and that’s essentially what it’s doing with its latest menu item, the steak nacho fries burrito.

This new menu monstrosity sort of borrows the concept that Pittsburgh’s Primanti Brothers made famous — put the french fries on the sandwich instead of serving them as a side dish.

That’s a menu hack that McDonald’s, Burger King and Wendy’s fans have done on their own for years. It’s also a logical fit with a burrito since burritos often contain potastoes.

What Are Taco Bell Nacho Fries Made Of

No Seriously They Used Ghost Peppers 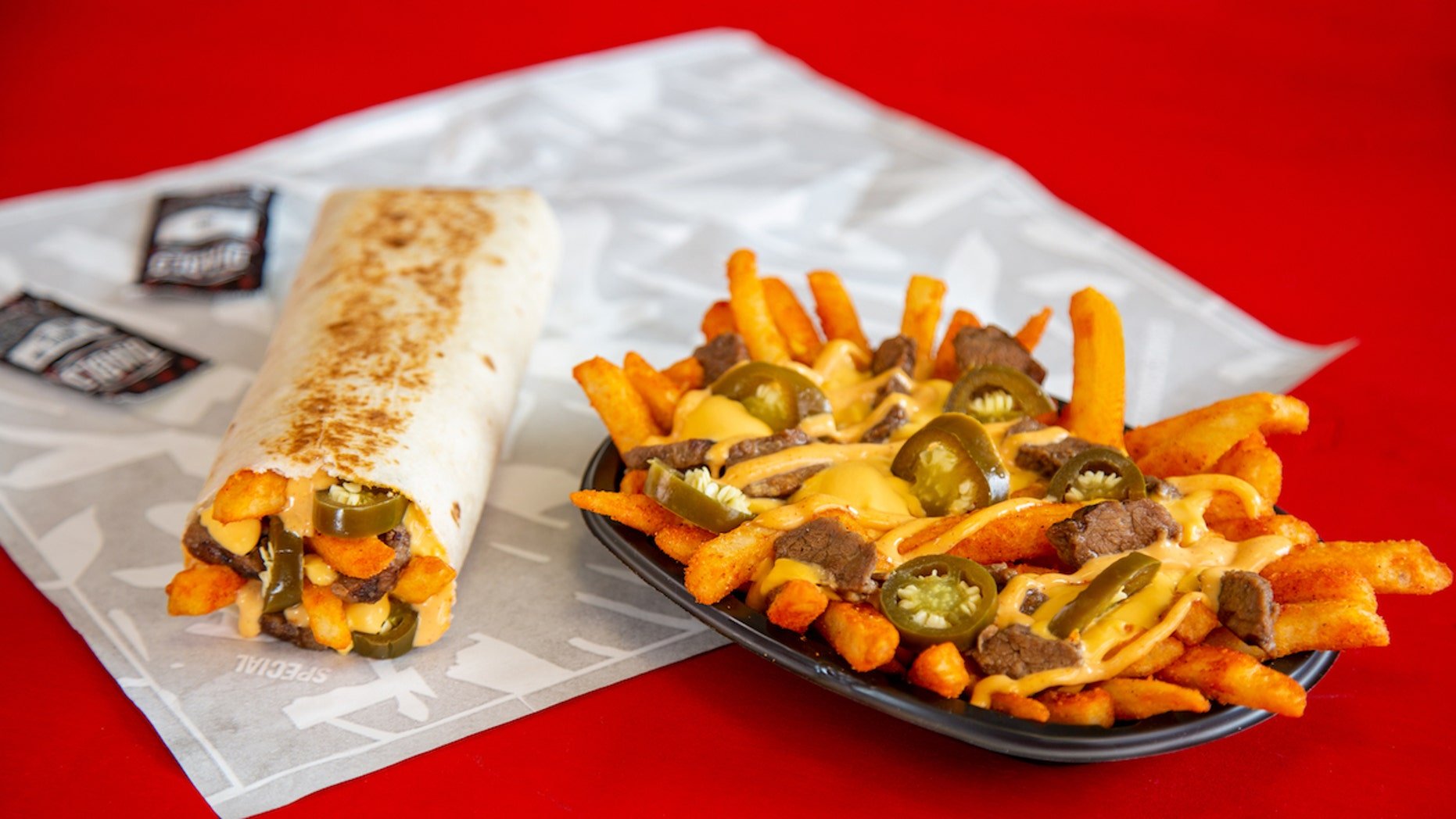 This summer Taco Bell has blessed us with a variety of new menu items. We got two new Flatbread Tacos and Nacho Fries are back for the seventh time . Now, Taco Bell is kicking Nacho Fries up a notch with White Hot Ranch Fries and White Hot Steak Ranch Fries.

If you are ready to pile on the heat, this new creation may be for you. The White Hot Ranch Fries take the classic Nacho Fries that we all know and love and pile them high with your choice of beef or steak, nacho cheese sauce, tomatoes, cheddar cheese, and the new spicy ranch sauce, which combines ghost chili peppers with creamy buttermilk. If using a fork isnt your thing, fear not. The White Hot Ranch Fries are also available as a burrito.

In case you havent noticed, were living in the golden age of Taco Bell. The fast food chain is releasing exciting new menu items and innovative grocery store products left and right.

You may be wondering: What exactly are Steak Rattlesnake Fries?

The fries, which were tested in Ohio, feature a base of boldly seasoned, crispy fries topped with marinated steak, nacho cheese sauce and taken up a notch with a bite of creamy jalapeño sauce and spicy jalapeños, according to a Taco Bell spokesperson.

You can get them a la carte for $2.99, or you can order them burrito-style, wrapped in a flour tortilla.

Sadly, the Steak Rattlesnake Fries will only be available for a limited timeso get em while you can.

Taco Bell celebrates the return of Nacho Fries with the debut of the new Steak Nacho Fries Burrito.

You can find the Steak Nacho Fries Burrito at participating Taco Bell locations nationwide for a limited time.

While enjoying their Taco Bell, two friends start to wonder if they’re stuck in a time loop. They’ve been eating White Hot Ranch Nacho Fries and Baja Blast every day. Some might refer to that as a “Deja Chew.”

None have been identified for this spot

Taco Bell Has A New Take On Nacho Fries

Taco Bell likes to take the same ingredients and find new ways to combine them. It does this across its entire menu, mixing and matching meats and toppings.

That makes sense in an era where menu simplification matters. With more people ordering for delivery and picking up at the drive-through, Taco Bell has engineered its menu to serve people as fast as possible. Its new Nacho Fries variant fits that model .

You May Like: Pee Dee Steak House On 125 Menu

The new limited-time-offer, Steak White Hot Ranch Fries. fits that model perfectly. It combines the existing Nacho Fries mostly with toppings that are already on the Taco Bell menu.

You can order the fries on their own or wrapped in a burrito. Taco Bell also offers a vegetarian version, which substitutes beans for steak.

The chain’s fry offering features lightly battered French fries coated in “bold Mexican seasonings” and served with a side of warm nacho cheese sauce for dipping.

What Is The Best Steak To Buy