How To Make Malibu Chicken

A few months ago I saw a recipe for Malibu Chicken on my friend Staceys blog Beauty and the Foodie. I had never heard of Malibu Chicken before and decided to do a google search. Here is what I found out.

Malibu Chicken is a dish made famous by the Sizzler Steak House and consists of breaded chicken, ham, and cheese baked in the oven.

There are many a copycat recipe for Malibu chicken online and they are all very similar. I even saw a YouTube clip of the original 1970s television advertisement for Malibu chicken. The announcer described a breaded chicken patty topped with ham and cheese served with a mustard dipping sauce and a steak. Honestly, the dish looks ghastly in the commercial.

One can find the most popular recipe for Malibu chicken on Chef in Training. Nikki states that her mother worked for Sizzler Steak House and shared the recipe with her. I looked at her recipe and thought it sounded wonderful, but I knew I could make it easier and low carb, gluten free, and even keto.

Ive made this recipe at least 10 times in the past few months and its always great. Since the original recipe for Malibu chicken calls for a mustard dipping sauce and a separate sauce in which to marinate the chicken, combining them into one and dividing use is the easiest solution.

Some of you may be of the opinion that baked chicken breasts are dry. This recipe for Malibu chicken is moist every time.

Sizzler Rolls Back Steak And Malibu Chicken To 1990s Price

Sizzler is offering a combo of its signature comfort foods at a price reminiscent of the 1990s. Steak and Malibu Chicken is only $7.99 from September 30 to November 10, 2013, at participating locations.

The classic Steak and Malibu Chicken consists of a six ounce tri tip sirloin and a single chicken patty topped with ham and two slices of melted Swiss cheese. The dish is accompanied by Sizzlers secret Malibu Sauce, a smooth and creamy, lightly flavored yellow mustard and mayonnaise dipping treat that many have tried to recreate at home. The entrée also includes a baked potato or guest-selected side dish.

People still need a place to celebrate the good things in life, like time with family, said Kerry Kramp, president and CEO. With Steak and Malibu Chicken for $7.99, we want to treat guests to two Sizzler favorites and to say Thank you by providing a well-deserved break from escalating prices.

Sizzler has entered its sixth consecutive year of same store sales increases by serving great tasting steaks, chicken, seafood and salads at affordable prices. Since its inception in 1958 when it served steak dinners for 99 cents, Sizzler has allowed working class men and women to take their families out for a high-quality, sit-down meal.

How Thick Should Malibu Chicken Ham Be

Malibu Chicken traditionally comes with two slices of swiss cheese and a slice of ham in between. The amount of ham you use is up to your discretion. However, I must advise you that the version of Malibu Chicken made popular by the Sizzler restaurant chain uses only a thin slice of ham between the slices of Swiss. For the best results buy ham at your deli counter and have it sliced to your desired thickness. The thickness of the Swiss cheese should overtake the ham by at least a 2:1 ratio.

Others Will See How You Vote 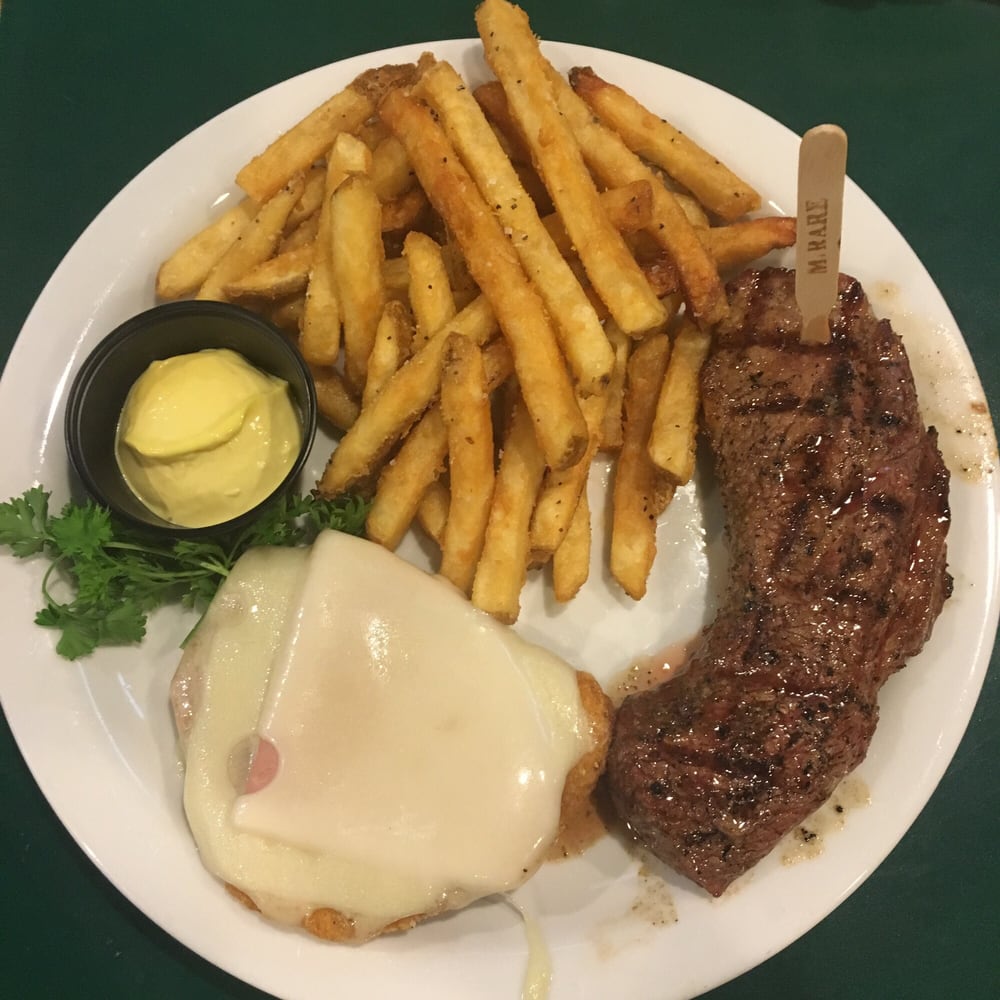 Had lunch there today. No complaints. Ordered the Steak and MalibuChicken. The steak was cooked as ordered. Not the best cut of meat, but for $12.99 I was happy with what I got. My server was very friendly and attentive. Wish I could remember her name. Anyway, I will be back again.

How To Pound Chicken Breast

When you pan-fry a chicken breast, you have to deal with the rounded shape. Its thick in the middle and thin on the sides. Its hard to cook the whole breast evenly. Thats why pounding the chicken is so important. It evens out the surface so that it cooks evenly on all sides. It also makes the chicken thinner, which results in a faster cook time.

When you properly pound the chicken before you bread it in buttermilk batter, you ensure that the chicken will consistently come out the same every time.

Pounding a chicken breast can be an awkward task. You dont want to get the juices anywhere and slapping the breast with a mallet is not the best way to avoid the spread of salmonella. Thats why its important to shield the chicken by placing it inside a plastic bag before pounding it flat.

How To Cook Malibu Chicken

Malibu chicken is a fried chicken dish that you cook in a cast iron. If you arent familiar with cast irons, they require minimal care, but there are a few maintenance and cleaning tidbits you need to bear in mind. For starters, make sure the whole pan is clean.

If you havent yet seasoned the pan, coat it all over in grapeseed oil, or another oil with a high smoke point. Dab up excess oil with a paper towel and place the skillet in an oven set to 500 degrees for one hour. Let the skillet cool completely before use.

A Homemade Version Of A Sizzler Classic

How Do You Get Crispy Chicken In The Oven

So, what does the cooling rack accomplish exactly? When you have the height of a cooling rack, air circulates and the bottom of your chicken does not get soggy from absorbing steam. This keeps your chicken bottom from becoming overly saturated and wet.

The best part? Cooling racks are fairly inexpensive. That means you can have crispier chicken for minimal cost!

Another word of warning about cooking the Malibu chicken. Make sure the skillet is good and hot. A seasoned skillet should have a naturally nonstick surface, but if you move the chicken too much right away, its liable to stick. Instead, leave it there for a few minutes and let it get a good sear before turning the chicken over. Its this cooking on both sides that makes pounding the chicken important.

Malibu chicken is very similar to an even better-known dish called chicken cordon bleu. Chicken Cordon Bleu also uses sliced ham and swiss cheese. The most notable difference is that the chicken is wrapped around the ham and Swiss cheese before being battered, then fried or pan baked. Chicken cordon bleu is a specific variation on the original cordon bleu dish which is made with veal.

Malibu Chicken achieves more or less the same effect, but its an easier cooking method. This recipe requires you first fry up the chicken, then add layers on top of the chicken. First, add a slice of Swiss cheese. Then add a slice of ham. Lastly, add one more slice of Swiss. Then put the whole thing in the oven to finish it off and melt the cheese.

What On Earth Is Malibu Chicken

First of all, let me confirm what it is not. It is not coconut batter fried chicken with Malibu rum. Hold that thought, though. Because that sounds good. Malibu Chicken is a popular dish served up at the family steak house The Sizzler, which is mostly found on the west coast with a few outliers across the country. The restaurant chain popularized the dish which is similar to a Chicken Cordon Bleu.

The name Malibu chicken refers to a famous southern California beach city which is known for its 21-mile coastline and Mediterranean climate. The name Malibu is derived from the Chumash Humaliwo, which means the surf sounds loudly. You would think, then that a dish named after Malibu would be somehow ocean-related, especially considering the Mediterranean connection. But no. Not unless were talking about the chicken of the sea, which is to say chicken of the land, or in other words, just chicken.

As for the dish itself, it is a buttermilk batter-fried chicken prepared with melted swiss cheese and ham on top. Its popular because its delicious and the best thing about it is, its easy to make at home. So, even if you dont have a Sizzler in your town, you can enjoy this winning flavor combination that has loyal fans returning to their favorite family restaurant year-round. 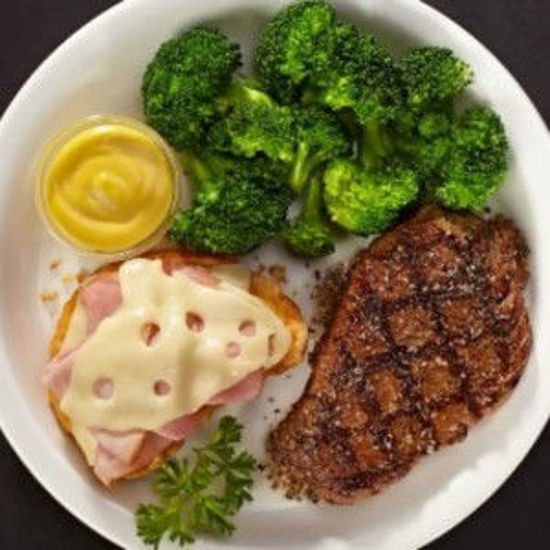 The next biggest thing about getting the Malibu chicken recipe right is nailing the sauce. The most important part of it is that its a sauce made up of mayonnaise and mustard. Mixing the two is a good quick and easy version, but you can use both Dijon and yellow mustard to get the sauce closer to the mark.

How Much Is A Steak And Lobster At Sizzler

Also know, how much is dinner at Sizzler?

I know some people can’t stand Sizzler’s but for those who like it they have some good priced meal deals on a entree PLUS all you can eat salad bar for Dinner for only 10 bucks and for lunch its only $7.99: Now you can enjoy many of American’s favorites for under $10! Including our world -famous Endless Salad Bar!!!

Additionally, how much is the salad bar at Sizzler? Sizzler Menu Prices

Also know, how much is steak and unlimited shrimp at Sizzler?

Find out the cost of items on the Sizzler menu.

How much does it cost to go to Sizzler?

*Available Mon-Sat excludes public holidays, $9.95 does not include Salad Bar. Enjoy All Kinds of Goodness with this fantastic offer, now available at all Sizzler restaurants, Tuesday 4-9pm for a limited time.

The list below is a quick overview of the ingredients you need to make Malibu Chicken at home. Full measurements and ingredient list can be found in the printable recipe card below.

What Temperature Do You Grill Steaks At

Does Mcdonald’s Still Have Steak Bagels

Where Can I Buy Tuna Steak

Where Can I Buy Tuna Steak

How To Grill Beef Steak